Mayim Grace Holloway (born 21 May 1986) is an American competitive swimmer, diver, and Olympic medalist on the 10-meter platform, winning silver at the 2008 Beijing Games. Holloway is also a one time world champion in diving and has won four Pan American championships as well as one Commonwealth Games championship. She is a four time NCAA All-American at Harvard University, a two time FINA World Cup champion, a 2007 Pan Pacific Championships gold medalist, and a 2008 US Olympic Committee Athlete of the Year honoree. She won the FINA Swimmer of the Year award in 2006, and the USA Diving Athlete of the Year award in 2007 and 2008. Holloway has won numerous medals and accolades in both long course swimming and diving competitions.

Holloway has also shared her knowledge of the sport through television. Her television resume includes the 2012 Olympic Trials and Games, the 2009, 2010 and 2012 NCAA Women's Championships, and the 2013 and 2014 World University Games. During the summer of 2016, she anchored the in-stadium radio broadcasts for diving at the Olympic Games in Rio, and was the bungee jump analyst for the ESPN X-Games. During the course of her athletic career, Holloway modeled for a number of publications, including Sports Illustrated, Time Magazine, ESPN Magazine, Vanity Fair, Vogue, and People Magazine. She also completed endorsement/sponsorship campaigns during this time for Under Armour, Speedo, Visa and AT&T. Holloway currently resides in Boston, Massachusetts.

Holloway graduated from Harvard University with a BS in sociology in 2008. She completed an MS in sociology at Boston University in 2011. She is a graduate of Salem High School, where she competed on the varsity swimming team as well as participated in various clubs. She was a National Honor Society member. At Harvard, Holloway competed as a Division I athlete, beginning in events such as the individual medley and switching two years later to diving. Holloway was a standout swimmer in her four years with the Crimson, earning a Major H in her junior season. She received the team Outstanding Swimmer Award in all of her four seasons, set seven school records, qualified for four NCAA Championships and capped her career by capturing the Career High Point Swimmer Award at the 2007 Ivy League Championships - all while maintaining a 4.0 GPA. Holloway was also honored by the Harvard Varsity Club, taking home the Mary G. Paget Prize in 2008 as the senior who had contributed most to women's athletics.

Holloway continues to hold the NCAA Division I championship record for women's diving on the 10 meter platform. She holds three FINA World Records, and also won two National Titles at AAU Nationals in 2007. She is affiliated with AAU and USA Diving, as well as USA Swimming including New England Swimming and United States Masters Swimming. 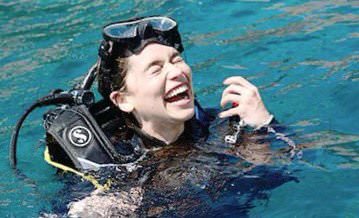 Holloway officially retired from the sport in 2008, and transitioned into coaching. She cited neck and shoulder injuries from years of platform diving, as well as the death of her mother right before competing at the Beijing Games, as reasons for her early retirement. She has competed at both 7.5 and 10 meters. Prior to her focus on diving, Holloway actively competed in events such as the 800m freestyle and the 400m individual medley.

She has been on staff with Boston's Sea Dragons Swim Club since 2009, where she presently coaches a junior girls' competition team. She has also been an assistant coach for Harvard University Women's Swimming and Diving Team since 2011. In 2016, Holloway received NCAA Division I Diving Coach of the Year honors. She also coached two Harvard University divers to NCAA Division I Nationals in the 2016-2017 season, where they placed 10th and 14th overall. Another one of her divers, Keisha Robinson, was the 2015-2016 NCAA Division I Women's National Diving Champion on both the 1 and 3 meter boards.

In her fourth season, Holloway helped Harvard post a 6-1 dual meet record and a runner-up showing at the Ivy League Championship Meet. Under her guidance, Harvard student-athletes earned 10 individual All-Ivy honors and four relay recognitions. Harvard also sent the only two Ivy League competitors to the NCAA Championships in swimmer Siobhan Dahlke and diver Jia Leung. The 2014-2015 season was highlighted by the Crimson winning the 12th Ivy League title in program history. Under the guidance of Holloway, the Crimson secured 14 All-Ivy honors, including seven first team accolades. Holloway's second season saw the Crimson go 6-0-1 against the Ancient Eight, before finishing as the runner-up at the Ivy League Championships. In addition to helping coach the Crimson to success in the pool, six of Holloway's student-athletes were recognized as CSCAA All-Academic Team members, while the entire squad was named a Scholar All-American Team. In her first season, Holloway helped the Crimson to a 6-1 overall record and an Ivy League Championship.